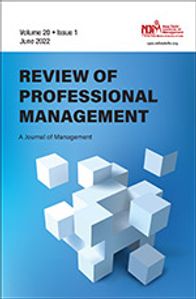 Anomalies are the abnormalities that occur in the financial markets. The explanation for this anomaly was not covered in the ambit of traditional finance, as investors were assumed to be rational. This drawback led to the emergence of behavioural finance. This field integrates traditional finance theories with behavioural aspects to understand the irrational behaviour of investors. The evolution of traditional theories of finance were unable to explain anomalies (speculative bubbles, overreaction, underreaction to new information) that existed in the stock market. The evolution of behavioural finance provided behavioural explanations for these anomalies (Kapoor & Prosad, 2017). Instances of irrational behaviour were observed among investors during the Global Crisis of 2008, demonetisation, and even during the ongoing COVID-19 pandemic. The 2008 Financial Crisis instigated the necessity to understand irrational human behaviour and, for this reason, emphasised the need to study behavioural finance (Nair & Antony, 2015).

The Securities and Exchange Board of India (SEBI) revealed a surge in new investors entering the stock market amid the pandemic. The new Demat accounts opened in the fiscal year 2020 were recorded at 4.9 million, which is the highest in at least a decade, leading to a 22.5% hike from 4 million accounts opened last year (Agarwal, 2020). This increase makes it pertinent to understand the influence of behavioural biases in investment decisions. A bias is a tendency to believe something or to be inclined towards something in an unreasonable manner. In this study, the cognitive dissonance bias has been selected to examine its presence and influence among the investors of Visakhapatnam city, India.

The author mentioned that individuals tend to show resistance when they are confronted with contradictory information to their current beliefs. Furthermore, when the time, money and effort involved to accept the new belief is high, the resistance level also remains high (Olsen, 2008). Due to this dissonance, the investors do not like to repurchase the assets that have increased in price because it would unwillingly make them admit that their earlier decision to sell the asset was a mistake (Chang et al., 2016). Investors believe the data collected by them to be useful and are inclined to trade. Individuals tend to understand one thing at a time and, in this process, miss other vital information (Barber & Odean, 2001; Wood & Zaichkowsky, 2004). They often remain serious about their original decision and stick reluctantly even though it is a costly affair (Singh & Bahl, 2016). Antoniou et al. (2013) found that bad news causes cognitive dissonance among small investors when they have positive beliefs and take time to let go of the loser stocks. On the other hand, large investors quickly respond to negative information and sell off loser stocks. This bias showed its influence on the psyche of Indian investors (Shahani & Gupta, 2019). Interestingly, Bernard et al. (2018) found that stock ownership creates a feeling of cognitive dissonance. Investor tends to take action even when they do not benefit the invested-in company.

Statement of the Problem

After the review, it was found that there were limited studies that examined the influence of cognitive dissonance bias on investors’ decisions. The influence of this bias leads to poor or sub-optimal decision-making. Furthermore, there is a dearth of such studies in Andhra Pradesh and particularly in Visakhapatnam city. There exists a research gap, and this article is an attempt to address it.

Need for the Study

Despite many investors entering the markets, they are not able to earn good returns and feel disappointed. This study is needed to understand cognitive dissonance bias and its influence on the investors’ behaviour. During the pandemic, the majority of Demat accounts were opened by millennials aged between 24 and 39 years (Gilchrist, 2020). Also, the sample for the study includes a majority of respondents (40%) from the age group below 35 years. Since the research was conducted during the pandemic time, it is relevant to understand the detrimental effects of this bias on investors’ return from the market.

Objectives of the Study

H0: There is no significant relationship between demographic variables and cognitive dissonance bias.

Methodology of the Study

The questionnaire consists of two parts: The first part focused on the demographic and investment profile, while the second part included a set of five questions regarding cognitive dissonance bias among investors and their stock market investment knowledge.

The primary source of data was collected using an online and offline questionnaire from investors in Visakhapatnam city and received 250 responses. Secondary data was taken from various articles, books and websites.

Period of the Study

The data was collected from July to September in the year 2020.

Tools Used in the Study

SPSS 20.0 software was used for one-way ANOVA and mean analysis.

The reliability of the questionnaire was tested using Cronbach’s alpha, and the results showed the alpha value as 0.7. As a general rule of thumb, this value is acceptable and good which makes the questionnaire reliable and consistent.

Table 1 presents the classification of respondents based on their educational qualifications. It shows that the respondents with doctorate degrees (3.6800) were most prone to cognitive dissonance bias, followed by undergraduates (3.5429) and then the individuals who were qualified chartered accountants, cost accountants, company secretaries and advocates (3.2500). The postgraduates (2.9920) showed the least susceptibility to this bias. The f-value was found to be 11.674 with a p-value of 0.000, that is, less than 0.05, thus, the null hypothesis is not accepted. There exists a significant relationship between the educational qualification of the respondent and cognitive dissonance bias. The occupation of an individual plays a key role in determining the amount of investment made by an investor. Table 2 shows the mean values of investors, that is, students (3.6800) and homemakers (3.8) were the most influenced by cognitive dissonance bias. This behaviour can be ascribed to the fact that their source of income is dependent on the monetary assistance received from the earning members of their household, which creates an innate need to be accountable for any loss that may occur. Thus, they prefer low-risk investments and often show herd behaviour. The least susceptibility to this bias was observed from the government employees (2.9). The ANOVA results show the significant p-value at 0.004, which is less than 0.05; thus, the null hypothesis is rejected. It can be observed from Table 3 that the mean value of investors with no source of income (4.0667) shows the highest susceptibility to cognitive dissonance bias. This was followed by investors who fall in the income slab between `750,000 and `1,000,000, that is, mean value 3.65. The f-value was found to be 7.93 with a p-value of .000, that is, less than 0.05; thus, we do not accept the null hypothesis. It shows that there is a significant relationship between individual average annual income and cognitive dissonance bias. About 46% of the respondents fall into the non-taxable income slab rate, that is, below `5 lakhs; their combined mean value was 3.205, which showed that they are also influenced by the cognitive dissonance bias. It is interesting to note that the investors whose average annual income was above `15 lakhs (mean value 2.6857) exhibited less influence of this bias on investment behaviour. It can be inferred that when an individual falls into a higher income slab, they have extra income for disposal which makes them financially confident to make independent investment choices. Interestingly, it can be observed in Table 5 that there exists a significant relationship between experience and cognitive dissonance bias. The f-value was 2.775 with a p-value of .028, that is, less than 0.05, thus the null hypothesis is not accepted. Investors with greater experience (above 15 years of age) in investment in stock markets had the least influence of cognitive dissonance bias (mean value of 2.9). They were able to mitigate the effect of this bias. Findings of the Study

Following are the findings of the study:

To overcome this bias, an investor must have an open mind and be ready to reflect on his/her mistakes. Investors must carefully analyse the market patterns using charts and follow authentic sources of news. The use of paper trading can be done simultaneously to keep a check on decisions which they impulsively make and compare that decision with those taken in reality. This comparison will help the investor to know the deviation in returns and will help them control this bias. With experience and adequate knowledge, one can learn to make independent decisions and avoid being prone to herd mentality.

Further, it is suggested that investors should also be provided with a booklet by their depository participant in vernacular languages to help them understand the basics of financial markets as many investors randomly begin investing without proper knowledge. Thus, financial literacy and self-control are the key aspects that will help an individual make rational choices and reduce their susceptibility towards biases.

Limitations of the Study

This sample size is limited to 250 investors only and cannot be generalised to all stock market investors. The majority of the respondents were men, so the behaviour of women investors could not be captured well. Due to the pandemic norms, the researcher’s interest to personally interview the respondents was constrained. Despite the limitations, care and effort have been taken to ensure the accuracy of the results.

Behavioural finance acts as a guide in making viable decisions by suggesting ways to avoid these mistakes, which are known as defensive behavioural finance applications in investment decision-making. This study further revalidates the influence of this bias on stock market investors, which leads to investors making sub-optimal investment choices. The factors such as education, occupation, income, Demat holding value, investor experience and cognitive dissonance bias have a significant relationship.

This study can be extended to brokers and investment advisors to understand their susceptibility to cognitive dissonance bias. A specific study on women investors would give a better understanding of their behaviour.

The authors declared no potential conflicts of interest with respect to the research, authorship and/or publication of this article.

The authors disclosed receipt of the following financial support for the research, authorship, and/or publication of this article: Preksha Dassani, is a recipient of the Indian Council of Social Science Research Doctoral Fellowship. This article is largely an outcome of the doctoral work sponsored by ICSSR. However, the responsibility for the facts stated, opinions expressed and the conclusions drawn is entirely that of the author. File No. RFD/2019-20/GEN/COMM/364

Most Downloaded
Make a Submission Order a Print Copy